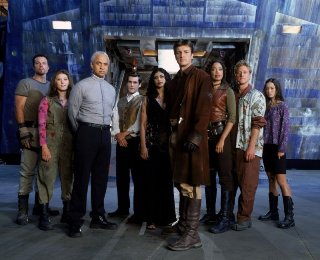 I'm aware of the praise for Firefly that has been shown by several bloggers. However, I must admit, the whole Buffy the Vampire Slayer legacy of Firefly creator Joss Whedon turned me off. I've had friends tell me that Buffy was a decent show but come on - it has a character named "Buffy" in it. However, I finally broke down and watched Firefly given all the praise it's gotten. I'm kind of rediscovering science fiction: I read a great book called Fire Upon the Deep and have been enjoying the first seasons of Farscape and Battlestar Gallactica, both of which I believe are great shows. And I'm an old trekkie who doesn't really think Star Wars counts as sci-fi.

So believe me when I say that Firefly is the greatest science fiction television show of all time, and possibly one of the best TV shows ever, period. Yes, I really do mean that. I'm awful at describing things I like to others, but I'll try.

The story is a cross between Old West adventure and space opera - Whedon describes it as a portrait of the kinds of people history always stepped on. These characters happen to be fiercely individualist, in the pioneer spirit. They fought against and lost to the Alliance that controls the system. Seeing no place for themselves in the world the Alliance is building, they seek dangerous, unsteady work on the fringes of civilization, fleeing and (every once in a while) grudgingly submitting to Alliance intervention. Because they reject the civilization imposed on them by force, they find themselves dealing with crooks, gangsters, thugs on a regular basis. This necessary dirty work never corrupts their moral compass - they see it as a lesser evil than submitting to tyranny.

The writing and character development are so rich and multi-dimensional that they easily carry the show. However, the science fiction aspects are go a long way towards not insulting the intelligence of educated viewers that it's hard to believe it when Whedon says that science questions make him cry. Space scenes are silent - you don't hear any sound effects when the spacecraft fire or blast off. The technology is incredibly believable - a mix of low-tech "things that do the job" and high tech gadgets.

I don't think I'm doing the series or the movie Serenity justice, but I highly encourage you to check the show out. If you share any of my tastes, you'll find it a real treat.