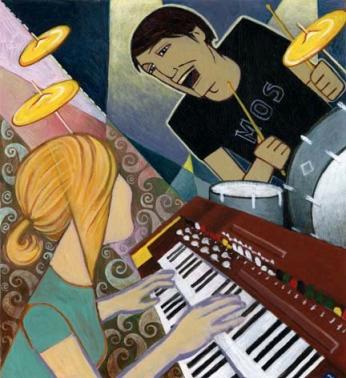 As in most areas of business, the nature of centralized, bureaucratic industry inevitably results in a certain amount of cultural entropy. The music industry is a great example of this: by turning artistic expression into a homogeonized market based soley on how many ears one can bend to the highest bidding advertiser, they've unquestionably damaged the evolution of popular music, in my opinion. In fact, the indie movement has grown and flourished largely as a reaction to not only the governing philosophy of this industry, but also the commonly associated aesthetic features. In other words, there's nothing intrinsically vacant about "pop music" - look to Motown as an example - but when music is just one more commodity, mass appeal trumps the drive to push the limits of art.

However, pop has a rich history and is one foundation of the American musical tradition. I think it's an error to dismiss it as merely some corporate marketing artifact. There's nothing inherently wrong about music with hooky melodies and well-packaged harmonic ideas. However, it has to come from the same place of honesty, talent, and production ethics that makes any artistic work worthwhile. To the extent that the independent forces in the music industry can capture, promote, and sustain this formula, we should embrace it. And all the better if the tunes are catchy. 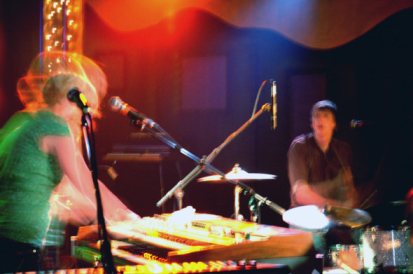 This is what really excites me about Mates of State - a reunification of genuine pop music with artistic purpose. I first saw this duo at the Austin City Limits festival last year (you can download the performance here). It was cute and synchronistic to see a husband and wife act while on our honeymoon, and you can tell that their music means a lot to them (many reviewers around the 'net refer to the onstage "loving gaze" between Kori and Jason; I think that's a really superficial way to pigeonhole them). I saw lots of great bands in Austin (most notably the Arcade Fire, an 8 or 9 piece band, about which I've already written) but this organ and drums duo blew everybody else off the stage as far as the fullness and richness of their sound. Factor in the spot on harmonies (both of them sing very well), abstract yet compelling lyrics, great songwriting, and singular melodies, and you've got a band that captures almost perfectly what I seek in music. Mates of State were the only band at Austin City Limits that actually brought me to tears (keep in mind, however, that Starship Troopers moved me to tears the first time I saw it). 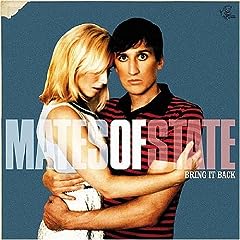 Seeing them live was great, but their albums are also very well produced. Mates of State just released a new album called Bring It Back, but their other albums are all keepers as well. Bring It Back is a great collection of pop anthems, touching ballads, and the generally progressive pop music around which they've built a loyal following. I like how both in concert and in the studio they keep the drums relatively high in the mix - it gives the music a very powerful, edgy sound, and Jason is adept at providing a good rhythmic counterpoint to Kori's organ work. I'm particularly intrigued by Kori's proficiency on the keys - in carrying practically the entire harmonic accompaniment on a combo organ she demonstrates exceptional subtelty, orchestration, and dexterity, bobbing around to the beat while pounding out resonant, space-filling riffs. I'd like to take lessons from her, in fact.

If you're one of those people who (as Matt described to me yesterday) claims to like all types of music, but in fact stays away from Brittany, Jessica, and fucking Matchbox 20, then I highly recommend checking them out. They may not be what you're looking for, but I think anybody would be hardpressed to deny their hardworking, "we'll play anywhere" sound. The love for performance they bring to the stage and the studio is obvious to the seasoned audiophile, and that in and of itself deserves praise. It's just an added bonus, I guess, that I love their music.