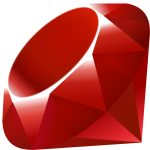 Praise be to jeebus - a development release of Ruby 1.9.0 was announced on ruby-lang.org Christmas Day (nice timing for the western world). I guess it's too early to install on my new slice, and probably better to wait for the package anyway. Nevertheless, at RubyConf this year we got a sneak peak at the priorities and decisions that have been guiding the implementation of 1.9, which above all should be much faster than 1.8 (and more competitive with other languages). More detailed changes here.

Also, in case you didn't hear, Rails 2.0 was released last month. 'Tis hot. And I finally figured out that scaffolding has NOT been gutted; I had lamented the fact that the scaffolded views no longer generated HTML input fields based on the database table fields. But now it's much more consistent: you name the fields at generation time and it creates the views and the migration for you. Kids, it pays to read the docs.