When the only tool you have is force, everything looks like a threat

Over at The Sisyphus Comments, a blog that deals with law enforcement issues from the perspective of a professional, the author criticizes Berkeley's ban on tasers, which the government is reconsidering:

Unfortunately, when non-criminal justice leaders attempt to assume responsibility for choosing intermediate weapons for the police department, bad things can happen. Without a range of intermediate force weapons, officers are often left with few options in their use of force continuum.

This is a good point, but it's not the whole story. The outcry over tasers is not, in the end, about increasing the range of options available to officers. I'm all for giving officers discretion - and the personal accountability that goes along with that, rather than hiding behind "policy" constantly - but the tasering debate really isn't about giving them "tools". Instead, it really boils down to the "cult of officer safety" that prescribes excessive force when any encounter with a citizen doesn't go the officer's way. 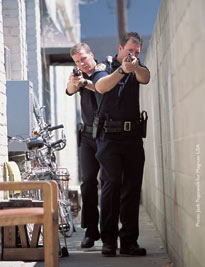 Look, nobody wants an officer to get shot, but they equally don't want an innocent person getting shot. The taser was originally sold to the public as a replacement for lethal force. The idea being that instead of shooting somebody who, say, had a cell phone in their hand that would be mistaken for a gun, they could tase and maintain their "officer safety" policies without killing citizens in a seemingly wanton fashion. The taser was supposed to be a silver bullet, minimizing the number of deaths resulting from split second defensive actions.

However, as time went on, tasers ended up being used in situations where lethal force would never have been used. They're being used in situations where nobody's lives are in danger, such as when people are upset or uncooperative. After all, it's much safer and easier (for the officer, at least) to simply disrupt a person's motor functions than to actually talk to them. Tell me that all those videos online of people being tased would have involved guns had tasers not been available. It would be a ridiculous assertion.

When tasers started being used as a means to punish and exact compliance instead of as a "second-to-last resort" tool, the number of people being tased went up. As the set of people being tased increased, the likelihood of a tasing affecting a pre-existing condition in the target increased. So, you started having tasing deaths over minor infractions, instead of it being an unfortunate result of trying to *prevent* a shooting.

The Berkeley policy is a little extreme: the only real policy needs to be that tasers are only used in life-threatening situations, just like guns. But that's not the real issue here - the real issue is the "officer safety" mentality that prescribes excessive force at the slightest perception of danger. The problem is using guns, tasers, and other lethal tools in non-life-threatening situations to escalate the encounter, all in order to give officers the touchy-feely that they're safe and in control of the situation.

When officer safety is the priority, regardless of the cost to the public, then the incentives have been distorted to the point where law enforcement occurs in spite of, rather than for the benefit of, the citizens. In the end, it's not the tools; it's the carpenter who feels that everything's a nail if it "gets them home at the end of the shift". By promoting an approach that seeks to remove the risk to officers in these situations, the danger has instead been perversely offset onto citizens - the very citizens whose safety the officers are supposed to be protecting. And in the end, that's the problem: you can't earn the trust and gratitude of citizens if you feel like your life and security is more valuable than theirs.