Notes on the "Revolution March" 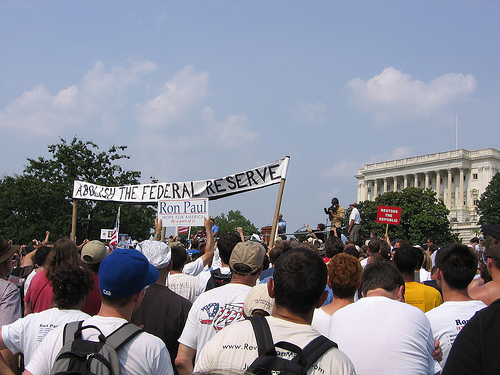 Last Saturday, Brady and I attended the Ron Paul Revolution March in Washington, D.C. I've been putting off this post for a while, as I've been going through one of those phases where I can't bear to blog. I've probably forgotten a lot, but I took notes, so this shouldn't be too difficult.

Brady and I drove up on Friday (thanks for driving, B) after we had made some last minute engineering alterations to our "Abolish the Federal Reserve" banner. We stayed at the Brickskellar Inn, which was conveniently located above the Brickskeller. I'd recommend the bar highly; it has a massive beer selection (no drafts, all bottles) and has a real old beer cellar ambiance to it. Great monte cristo sandwiches to boot. As far as the inn, it took us a little by surprise; we knew accommodations would be spartan (shared bathrooms for the entire floor) but the lack of towels surprised me. But if you're prepared, it's a cheap way to stay in the Dupont Circle neighborhood.

The highlight of Friday was meeting Darrin Knode and his friends Mike and Adrian. Darrin is a left libertarian blogger who had corresponded with me about starting a northern Virginia A.L.L. chapter, and we had a good time drinking and discussing left libertarian strategy and politics. I'm so used to those discussions occurring with people less like minded than me that it's hard to switch gears to "libertarian speak" sometimes, but we had a blast (once we found each other - the bar is two floors and pretty labyrinthine).

On Saturday, Brady and I grabbed breakfast and then carried our banners and signs to the staging ground for the march in front of the Washington Monument, where the marchers were gathering. We quickly decided we needed a third center pole on our banner and rigged one up, recruiting a random guy to help us carry it. It took the march a while to get started, so we had the opportunity to distribute literature (RLLA brochures and Carson's "Iron Fist" tract) and meet our fellow marchers. It was a short route to the Capitol lawn where the rest of the rally would occur, but it was cool to walk past the IRS and taunt them.

At the Capitol lawn, the one complaint I had was the sound system. First, the kept playing that damn Ron Paul Revolution song over and over and over. Come on. Second, the guys MCing the event yelled into the microphone when it was totally unnecessary, and it was obnoxious as fuck. What were their credentials, anyway - one of them designed the Revolution logo? That's hardly something I really care about when I go to a rally to hear speeches. Also, the Capitol police were monitoring us the whole time, and some said there was a sniper on the roof. Great.

And while I'm bitching, two of the speakers were really poorly chosen: Jack McLamb and Jeff Lewis. The former is a cop who kept saying "praise God" after every sentence and kept talking about 9/11 conspiracies and the government putting marks on your mailbox so the U.N. troops know whom to kill. I have no problem with conspiracies or religion; I have a problem with people co-opting others' events to promote their agendas. Lewis was a complete bigot who got little support from the crowd in his bashing of immigrants. While I realize many Ron Paul supporters want something done about illegal immigration, this guy was practically proposing a police state to get the job done. He was also a sucky speaker, and by the end I and a few others were booing him.

Now to the highlights. The best speaker was Adam Kokesh of Iraq Veterans Against the War, who took an absolutely militant stance on resisting tyrannical government. It was great to see him really get a crowd that calls itself a "revolution" pumping their fists in the air. The text of his speech is here, but try to find a recording if you can because the full effect is lost without hearing it.

The other outstanding speech was given by Naomi Wolf, who has written a book documenting the ten steps liberal societies take in transforming into totalitarian societies. She stressed her regret for ignoring libertarians for so long, telling us that she looked forward to "grabbing a beer with us". She's come to the same conclusion I have: opposing tyrannical government will take a broad coalition from the left and right to succeed, and she placed particular emphasis on making the Ron Paul Revolution a part of this struggle.

It was great to have more time to hang out with Darrin and company; just wish the sound system hadn't been so loud, because I could barely hear him. I ended up straining my voice, not by shouting so much as trying to talk to my friends over the noise at the march. Also got a nasty burn because of how hot and sunny it was out there on the lawn. I'm pretty sure at some point I got really dehydrated or got heat fatigue or whatever because I got light-headed and started getting red spots on my skin, so at one point I walked off to get a popsicle and water. The whole thing wrapped up after Ron Paul gave an adequate but unremarkable speech, and we hit the road. All in all a great time, and it reinforced the notion that the Ron Paul Revolution is an ally in the struggle, but that there's also a need for a more leftist group pushing the freedom message.