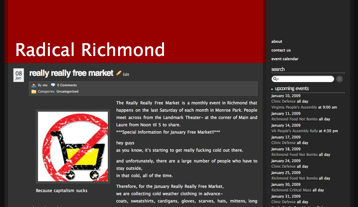 [/caption]One of the great things about Richmond is that we have a pretty decent activist community already here. The Alliance has benefited from working with these groups, since building alternative institutions that can displace the state doesn't mean ignoring those that already exist! I've learned so much just by participating in other organizations, getting to know the people who care enough to act, and hitting the streets with them.

However, one of the problems I've noticed is that there's not enough communication between activists about their activities. While different groups and people may have different priorities or divergent agendas, there are too many issues where we agree - but because we're not a member of one or another group, we never find out about opportunities to join forces with like minded activists. What is needed is a central clearing house that everybody can come to in order to see what's going on in Richmond.

I've been talking about this idea for a year or two now, and I've finally found a core group of motivated people who can help me run such a site. They represent a variety of activist interests throughout the metro area, but we all agree that the community as a whole benefits when one hand knows what the other is doing. RadicalRichmond.net will attempt to serve as a community site and dissemination point for activism info in the central Virginia area. Please spread the word and contribute!