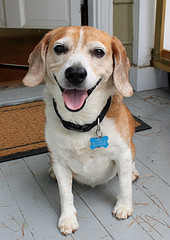 A few minutes ago Tasha and I said our tearful goodbyes to our friend and companion for the last twelve years, our beagle Tela. Tela wasn't just a wonderful, cheerful, cuddly dog whom we doted on; her life intersected with our relationship so completely that it is difficult to picture us without her. We always told her that we were a couple, but that she made us a family.

Tela came into our lives because I needed a present for Tasha when she graduated from college. She was actually promised to Tasha before she was even born, and ended up being born on Tasha's graduation day. Tasha would be going back home to start building her pottery business, and I still had another year or so of school. So my mom got me in touch with a breeder in my hometown, and they arranged for us to come visit the litter once it arrived. 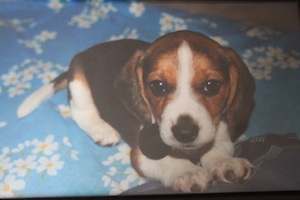 If you think beagles are cute, you need to experience beagle puppies. Tela was from a litter of six or seven, but all of them died but her and her brother. Tasha connected with her instantly; she was mostly black with brown and white areas, and she had a little Hitler-moustache-like marking under her nose. If I hadn't been a broke student living in a non-pet-friendly apartment, I might have taken her brother. As it was, we certified ourselves as decent people to the breeders, and a week later we picked her up on the way back from a Disco Biscuits show (Tela is a Phish song, I was kind of a hippie back then).

We took her to my apartment in Fredericksburg and, after playing with her a bit, put her in a crate and went to dinner. That was the last time we ever tried to crate Tela; she did not like and let us know by leaving a mess for us when we got back. Luckily she was so goddamn cute it didn't matter. We still have the photograph of her that first night of hers with us, scared and sitting on (what was to her) a giant pillow on the bed. Matt was actually her first babysitter, as we left her with him the next day at the apartment he and I shared. 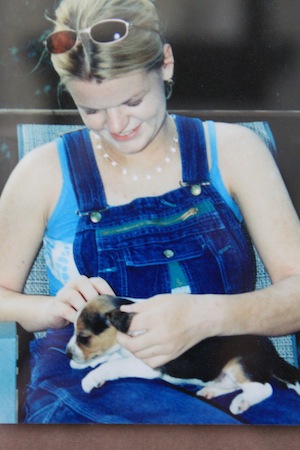 Tasha lived in Mathews on her own for the next year, but just about every weekend they came up to visit and hide out in my non-pet-friendly apartment. We spent a lot of time walking around Fredericksburg, and Tela broke hearts left and right. Tasha and I also went on our first backpacking trip together, and we brought little Tela--probably not a good idea in retrospect, since the elevation changes were pretty bad for us, let alone a little puppy. However, as the consummate hound, Tela loved trails, and held her own the whole time. The only exception was a flash storm where we all got drenched, and Tasha made a makeshift sling out of a towel and carried Tela against her chest like a baby carrier for the next hour or so.

One fixture of Tela's life was The Poddery, where Tasha worked for many years. It was on fourty acres of rural land in Mathews, and Tela could roam around to her hearts content. Everywhere else she was on a leash or fenced in, so this was a big deal. She would wander off for hours, but when we'd call, inevitably she'd coming racing back, often smelling like something really, really smelly she got into. She also socialized with the resident German Shepherd, LeRoy, and they were good friends. 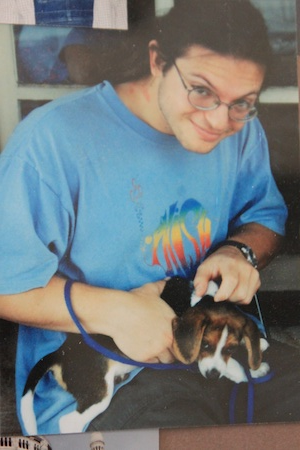 Until recently, Tela spent time in Mathews when we needed to leave her and travel. Tasha's parents would watch her, and she grew mighty close to them. Tasha's dad can't hear high pitched noises, so Tela's whining never got her any food, and she eventually stopped whining altogether around him. This was also helped by the fact that he always gave her a great meal after he ate. Tela turned Tasha's dad into a dog person, and they ended up adopting a hound puppy that we found abandoned in Mathews. That puppy grew to be six times Tela's size, but there was never any doubt who was in charge. I should mention that she was not an anarchist like me, but a natural ruler.

Tela never liked getting in water. One time in Mathews, we were at the beach swimming in an area where the outgoing tide left little islands. We really wanted to see Tela swim, so I did something mean--I went out to one of the little islands and whimpered and whined like I was hurt. Tela started whining back at me, and then jumped in and doggie-paddled over to me, crying the whole way. I was so heartbroken after that that the only other time I made her swim was when I was canoeing with her at The Poddery, and the guy with me capsized the canoe (to operate a potato cannon, but that's not germaine). Everybody went underwater in a flash, and when I bobbed up and got my bearings, I could see Tela paddling and crying. I put her on land and she instantly peed. Good girl! 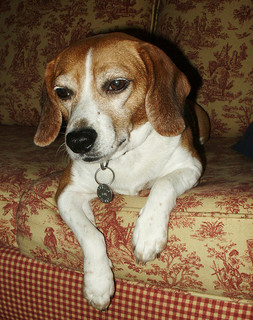 One thing that was tough was that she never liked car trips. We used to take her to Shenandoah National Forest often for backpacking and hiking, but she got really nervous and panty in the car. It might be because, one time, we put her in the front seat while Tasha changed in the back after a hike, and she got her collar caught on a piece of metal in my car and almost choked to death. After that, Tasha always insisted we remove her collar when we left her alone.

Tasha and I moved to Tappahannock to be in between her work and mine, so we were basically out in a cornfield for over three years. This afforded Tela many opportunities to spot and chase rabbits, and we had some good places to walk as well. Once when we were walking down a road by a cornfield, a puppy lept out and went up to Tela. Tela never really got along with other dogs well, especially ones she didn't know, but she helped me find an entire litter that had been abandonded. We were able to place them all in good homes, ensuring that Tela could be the only baby again, which was exactly how she liked it. 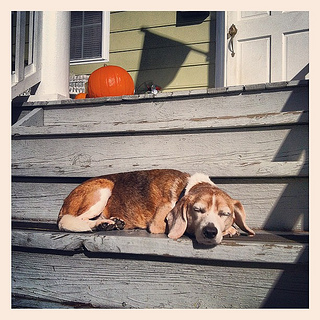 Tela was part of our wedding party, and her outfit actually cost more than mine! We got married at The Poddery, so it was someplace where we all could become a real family on paper. This was right after we had moved to Richmond, when Tela was really maturing and had fully developed her personality. She really liked cuddling and comfort, and would snuggle down the bottom of the bed to find it. She loved belly rubs, smelling things, and of course, FOOD. Her greed for food was a force of nature, and we were never quite able to stop her from whining while we ate--the best we could do was get her not to whine but merely tremble violently in anticipation of some treat when we were done.

When we finally moved into our house, Tela made it her own. She staked out exactly where she wanted to nap, where she wanted to sleep, and where she wanted to roam outside, which just happened to be the area we fenced in for her. Tasha's sister and brother-in-law, Kristal and John, moved into the neighborhood a few blocks away with their dachshund, Boudin, who was just about exactly the same size. We went on a lot of walks around Springhill, down Buttermilk Trail and across Belle Isle. I really appreciate where we live because it afforded Tela wonderful walks during the last years of her life. 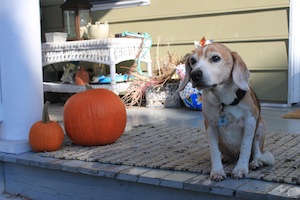 Unfortunately, Tela had been diagnosed with weak kidneys years ago, and this caught up with her in late September. She eventually went blind for a few weeks until we got her hypertension under control, but her recovery was tepid. Her once voratious and ever-present appetite disappeared, and we couldn't get her to eat, let alone take her medicine. Eventually she became so lethargic and obviously unhappy that we finally knew it was time to say goodbye. Our vet graciously offered to come to our house and put her to sleep. She died with Tasha's arms around her and her chin resting on my hand as I looked into her eyes.

I never had a pet growing up. Tela was not only my first dog, but the first person (yes, she is a person, just not human) who was completely dependent on me. But she was also the first creature I ever encountered who loved me so wordlessly that I had to open my heart completely, without any thinking or intellectualizing. I wonder if I'd ever let myself down if I saw myself the way she obviously always saw me. There is no doubt in my mind whatsoever that dogs, and probably lots of animals, are sentient beings who have personalities and feel love. And her expert taste in comfort inspired us to make her house a home. She will be dearly, dearly missed by Tasha, me, her family, and all who knew her. 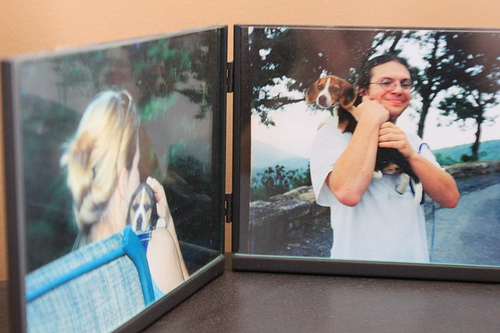