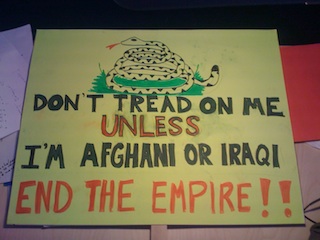 Going to any rally seeking reasonable conversation probably makes no sense, so I was prepared for some dirty looks. My sign read on one side "IS THE WAR ON TERROR BIG GOV'T? JUST ASK AN IRAQI OR AN AFGHANI!" with a link to collateralmurder.com. On the other side I fashioned a Gadsen style design reading, "DON'T TREAT ON ME / UNLESS I'M AFGHANI OR IRAQI / END THE EMPIRE!" The signs were not designed to find people who agreed with my positions on the conflicts, obviously. 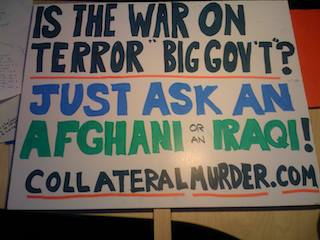 Soon enough when I got into the crowd, I had people looking at my sign. However, most people were pretty standoffish about it. They were content to ignore it, which after all is always the most effective resistance to any argument. I can't compete with disciplined minds.

Pretty soon I a younger gentleman approached me about my sign. He had some pointed questions for me at first, but once I answered them - framing them in terms of the Constitution and budgets - he lightened up and got thoughtful. We started talking about how tragic the military's heavy hand is, and he seemed genuinely puzzled by the problem. I can respect that; I simply gave him my point of view coupled with some observations about conservatism he seemed receptive to. We used his remark that he's more of a Buckleyite to jump off into a conversation I sincerely enjoyed. As the rally got underway, a chant of USA started. My new friend just looked at me and rolled his eyes. Later, when they played "Proud to Be an American", he remarked on the cliche.

As we were talking, an older woman approached me and asked me about my sign. I made the same argument about military spending, but she was much more combative. She made an offhand comment about how she thought the sign was "anti-tea party" (whatever that means) but I calmly stated what I thought was a conservative position and explained the contradictions in hers. While this slowed her down, she still persisted in attacking me. When I explained that my opposition to big government extended to foreign aid of Israel, she quickly wrapped up and left. The obvious implication was that I was an anti-semite. I was surprised how little it bothered me.

While the young conservative and I were discussing the encounter, she returned and offered a defense of Israeli interventionism on a scriptural basis. My retort focused on my tax liability for her beliefs. I finally got through to her, and she agreed to disagree. That's a satisfactory conclusion for me - instant conversion does not redound to the credit of the mind thusly won.

The others who approached me were respectful. One lady said she didn't want any innocent Afghanis or Iraqis to be oppressed. I simply pointed out the facts of the Collateral Murder video. When during the course of my argument I pointed out that soldiers do an enormously difficult job, she interjected, "And thank God they do it!" departing swiftly. Quick exits from conversation were common.

I ran into several people I knew from the Ron Paul campaign, and even a lefty friend undercover in a journalistic capacity. A few asked about the url on my sign. Donna Holt gave a great talk on behalf of Virginia Campaign for Liberty focusing on the sovereignty bills she played a pivotal role in getting passed. However, most of the speakers I found lackluster; they fanned the flames, quoted the Constitution, but even when they waxed intellectual they didn't seem grounded. So much emphasis is placed on social programs that the most oppressed in our society rely on. I always admired Paul's refusal to place welfare programs on the chopping block automatically, as he prioritized the end of the empire as the best place to cut costs.

I left before the event ended; nobody else was talking. It was definitely good practice reaching out to people whom I don't normally mix with, and I appreciate the civility of almost everybody there. Indeed, many took pictures of my sign, so hopefully the messages will endure. And it's always better to find out for yourself than to trust other people's views!