Wandering upon the Affective Terrain
Understanding Emotions as Information

Pema Chodron's What to Do When the Going Gets Rough has had a great deal of influence in my daily life. It appears to me that in meeting the difficulties of life we are faced with several levels of experience. In order to process this stuff we harvest from our waking lives, we need more than just the mind, and Chodron has given me novel tools to do just this.

I'm fascinated by the way Bhuddist thought aligns with my chosen philosophy of life and spirit, but the most intriguing aspect for me is the praxis of Bhuddism. While much spiritual information can seem unmoored from and hovering over the material life, Bhuddism has a wealth of accumulated practices, strategies, techniques, and attitudes that seem to be able to ground the subtle and intangible in the daily go-round. Chodron's article was the first that really woke me up to how much help there is available when we seem to be floating in mid-air.

The great lesson I feel I'm now learning is that of appreciating emotion. I've often approached it in the past in much the same way an objectivist might: that our emotions are reflections of the quality of our thinking. According to this attitude, a difficult emotion is a sign of some problem to be addressed, and the purpose of addressing it is to attain forward progress by overcoming or purging it. It is no exaggeration to describe my former regard for emotions as one regards noise in the signal.

The Only Way to Win the Game

I've been doing a lot of work on the blog infrastructure lately, including augmenting the tag system and updating my links page. Most of my blogroll and links from the old Wordpress site got lost, so I'm trying to put together something that represents all my interests and the blogs and sites I read and support. I rediscovered lawofone.info which is an awesome web application my friend Tobey Wheelock put together to make the Law of One material indexable, searchable, and categorized. He's also used it to compile his work on relistening to the original sessions and he's picking up some interesting corrections to the original text. It's really cool to see the material go from one guarded by a few people to a crowd-sourced collaborative rediscovery of the source.

Anyway, Tobey also has a page of interesting quotes and I found one of my favorites. One of the things that really appeals to me about this way of looking at the human condition is that it reconciles waking life with a greater reality in a way that doesn't require you to really believe in any concrete metaphysics or afterlife or anything fancy. The focus is not on heaven or hell but on making the best use of the tool of human incarnation. Getting new agey people to appreciate their mundane human experience -- not in contradiction to but as itself the spiritual teleology they seek -- prioritizes self-knowledge over system- or doctrine-knowledge. Spirituality should be something you engage in to satisfy your own needs, not to conform to a system that will fill in the blanks for you.

So why is our human condition the way it is, if we are all genuinely one? Why do we have these short lives trapped in finite bodies with limited senses if we are, indeed, infinite in reality? Because there is a utility in our ignorance, something we can learn in this constrained experience that we can't learn in any other way:

I've often felt that my political principles are merely the application of beliefs and ideas that I hold on a deeper and more fundamental level. This quote does a better job of stating the relationship between the individual striving for spiritual understanding and the political striving for liberty than anything I've ever written:

Entities within your culture are fond of saying that humankind is made in the image and nature of the Creator. What image do we think of? What image comes to mind when one thinks of the Creator? That is a key question, and central to those who seek faith. For if a Creator is sought that is angry and punishing, righteous and full of justice, then we gaze at a part of ourselves, and if the Creator is gentle and nurturing and all embracing and unifying, then we gaze at a part of ourselves. Since there is a mystery, there is a choice to be made concerning one's attitude towards that mystery. Those who feel instinctively that the Creator is an unifying, loving and nurturing Creator are those which discover faith in one way, that is the positive path of polarization through service to the infinite One and to other selves, the images of the infinite One. Those who choose to see the creator of judgment, righteousness and law, are those who wish control, control over the life, control over the self, control over others, that there be no surprises, but that all be reckoned ahead of time, safe and tidy. This is the path of separation. We are aware that we speak to those upon the positive path of polarization, and so we will address faith in its positive sense, that is, that faith does not begin with faith in the self, but faith in the Creator. (Hatonn, February 3, 1991) 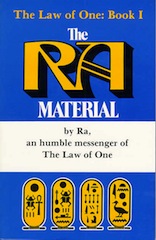 Ever since I started this blog I've occasionally referenced something called "the Law of One", and I have received questions on what that actually is from time to time. Several concepts from this blog, including "social memory complex" and "6th density", are from a body of work available from L/L Research known alternately as "The Ra Material" or "The Law of One". These are transcriptions of conversations between a member of L/L Research and a claimed disincarnate entity calling itself "Ra" that occurred by means of trance channeling. Today is the thirtieth anniversary of that initial contact, and I've written a congratulatory letter to Carla Rueckert and Jim McCarty, the surviving members of L/L Research, which you can find here.

I have a history with channeled material. During my childhood my parents were very interested in so-called "new age" thought generally and the Edgar Cayce channellings from the early 20th century in particular, and when I was in middle school I began to develop an interest in reading them. I had had some personal experiences that inspired a curiosity in spirituality and had parents who encouraged it. Cayce gave tens of thousands of deep trance psychic readings that resulted in countless cures that cannot be explained by any modern science. However, interspersed throughout those healing readings were other pieces of information. There was all sorts of stuff about ancient civilizations and technologies, past lives and reincarnation, and attempts to explain the nature of the human condition beyond what we experience on a day to day basis. I became enthralled by this window into a larger reality, part science fiction, part metaphysics.

The Unique One and the Universal

Over the past two to three years, I've engaged in many conversations featuring the appeal to moral principles asserted to be held in common. Some who've known me for a while may notice that over this period I've begun to distance myself from appealing to these moral principles as a basis for my arguments. This has been a rule I've adhered to largely from both my own investigations of my beliefs as well as the influence of Max Stirner's "The Ego and Its Own" (or, as Shawn Wilbur correctly points out is a better translation of the title, "The Unique One and Its Property").

Stirner taught me that abstractions and concepts ("spooks") often rule us just as completely and arbitrarily as corporeal authorities, and that true freedom requires one to break free of all preconceived notions of propriety, convention, and duty. This philosophy is often called "egoism" and is treated by many as a form of nihilistic realism culminating in an almost Nietzschean "will to power". All constraints on the ego are to be discarded in order for the self to express itself fully through its property, its ideas.

This causes understandable concern in many. The search for perfect and complete freedom is framed in terms that are positively anti-social. If adhering to ethical codes or moral laws or legal statutes or social conventions should displease you, why not throw them all out? After all, what makes them all more valuable than your own happiness? And I find this a hard argument to reject without appealing to other spooks.